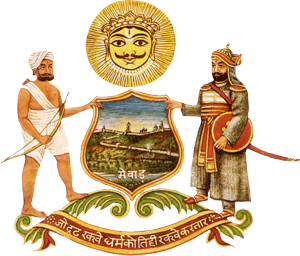 Udaipur was founded in 1559 by Maharana Udai Singh II as the final capital of the erstwhile Mewar kingdom, located to the southwest of Nagda, on the Banas River, the first capital of the Mewar kingdom. Legend has it that Maharana Udai Singh II came upon a hermit while hunting in the foothills of the Aravalli Range. The hermit blessed the king and asked him to build a palace on the spot, assuring him it would be well protected. Udai Singh II consequently established a residence on the site. In 1568, the Mughal emperor Akbar captured the fort of Chittor, and Udai Singh moved the capital to the site of his residence, which became the city of Udaipur.

As the Mughal empire weakened, the Sisodia ranas, and later maharanas (also called the Guhilots or Suryavansh), who had always tried to oppose Mughal dominance, reasserted their independence and recaptured most of Mewar except for Chittor. Udaipur remained the capital of the state, which became a princely state of British India in 1818. Being a mountainous region and unsuitable for heavily armoured Mughal horses, Udaipur remained safe from Mughal influence in spite of much pressure. The rajvansh of Udaipur was one of the oldest dynasty of the world. Maharana Mokal (Ruling Period: 1421 – 1433) was a great builder and he inherited this trait from his father, Maharana Lakha. He created various buildings along with completing those commenced by his father. The duty to transform their motherland thus flowed down the veins of the Sisodiyas.

Maharana Lakha, the 45th Maharana of Mewar died in war leaving young Mokal as his successor. Being a minor, his eldest brother Choonda began to look after the state of affairs as promised to Rana Lakha. But Mokal’s mother Hansa Bai did not like the influence that Choonda had over the nobles of Mewar. She questioned his integrity and doubted his intentions. Her resentment made Choonda leave Chittor and retire to Mandu, capital of Malwa. Rani Hansa Bai attained help from her brother Ranmal of Marwar to administer the state of affairs on behalf of Mokal until he was a minor.

Maharana Mokal had a brief stint as the ruler of Mewar but rose to fame as the most celebrated warrior of his race. He defeated Nagour, Gujarat and repelled an invasion by the Delhi Sultan. But most importantly, he completed palaces that were commenced by his father Maharan Lakha and conspired to build more aesthetic structures. But his sad demise at a young age of 24 put a stop to this emerging illustration of Mewar. His assassination by his paternal uncles, Chacha and Mera brought an end to a great Maharana in the making.

Rana Kumbha who was only 13 years old at the time of Mokal’s death, ascended the throne at a crucial juncture in the history of Mewar. The young Kumbha may have had the most unfavorable situation after his father’s untimely death but the valour and vision of his father, Maharana Mokal inspired him to emerge as one of the greatest rulers Mewar ever knew. Maharana Kumbha (Ruling Period: 1433 – 1468), Standing in front of the fort of Kumbhalgarh, one cannot resist the awe this glorious fort manifests in it. Sometimes it is difficult to imagine how structures like such were conceived, perceived or built. At a height of 1,100 metres above sea level, this magnanimous structure is a saga of glory, gallant and grandeur. Built by Maharana Kumbha, this fort of Kumbhalgarh remained uncaptured till the end; and is a literal depiction of the Rana himself.

Maharana Kumbha or Kumbhakarna Singh was the eldest son of Maharana Mokal of Mewar and his wife Sobhagya Devi. He ascended the throne after his father was assassinated. He ruled Mewar for thirty five years; the historians often called the era ‘the golden period of Mewar’. This heroic ruler of Mewar is remembered and idolised by people for varied reasons. While history remembers him as the powerful man who never lost any battle, the Rajputs consider him as the only Hindu king of the time when the rest of India was under muslim dynasties.

Mewar was the only Hindu-ruled major state allocating its supremacy to Lord Shiva. The powerful Muslim principalities united and aimed to defeat Rana Kumbha but their efforts were thwarted every time by the Rana, single handed. He captured the muslim capital of Rajasthan; Nagaur and established himself as ‘The undefeated’.

The Art lovers remember the ruler as a great poet and musician. He was a great scholar and patron of music and wrote extensively on music. He devoted himself to learning and uplifting Indian classical music to preserve the ancient traditions of classical music.

And lastly, the remaining recall him as one of the greatest builders of Mewar, who built across Mewar, nearly thirty two fortresses including the fort of Kumbhalgarh, renowned temple of Ranakpur and the famous Victory Tower or the Vijay Stambha in Chittor to commemorate his victory over the combined armies of Malwa and Gujarat. Maharana Kumbha was killed while he was offering prayers to Lord Shiva.