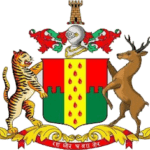 The state was founded in 1765 by Kunwar Guman Singh, a great grandson of Maharajadhiraja Chhatrasal of Mahewa (see Orchha). The Maharaja, in 1893, was allowed to maintain a military force of 97 cavalry, 544 infantry and 13 guns.

Original Flag of the State: State flag, properly royal standard, granted by Queen Victoria to the sovereign Ranjor Singh Bahadur in January 1877. Raised in the form of banner had the two different sides. On the front side bore the coat of arms was designed for the occasion. On the back there were floral patterns and an inscription.
New Version of the Flag of the State:Flag has been in use until 1948. Drape formed by two overlapping triangles unequal. Different sides. On the obverse of the flag features Hanuman without the colors on the smaller triangle at the top, and a yellow sun with the initials of Raja on the large triangle. The toward, a flower and showed an increasing moon both included in the larger triangle. The camp was violet on both sides.

Ruler of Ajaigarh is entitled to a salute of 11 guns, and maintains a military force of 97 cavalry, 544 infantry, and 13 guns.

INTERREGNUM 1855/1858, Ajaigarh escheated to the British Government, but in 1858 after the Mutiny, the late Raja’s mother was allowed to adopt Kanwar Ranjor Singh, who the succeeded to the state. REGENT The Rajmata of Ajaigarh 1858/1868.
Facebook-f Twitter Whatsapp Linkedin