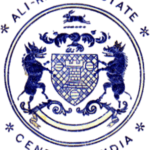 Flag of the State of Ali Rajpur:

The colors red and white were the same as Indore, granted by the rulers of Indore as a sign of friendship and gratitude. 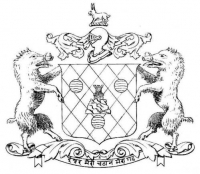 Arms: Lozengy Tenn and Argent, a tower on a hill between three fountains proper.
Crest: On a helmet to the dexter, lambrequined Tenn and Argent, a hare courant proper.
Supporters: Two boars proper.
Motto: Isvara, meri Catan, mera Garh. (God, my Rock, my Fortress).
Personal Flag of H.H. The Raja of Ali Rajpur: