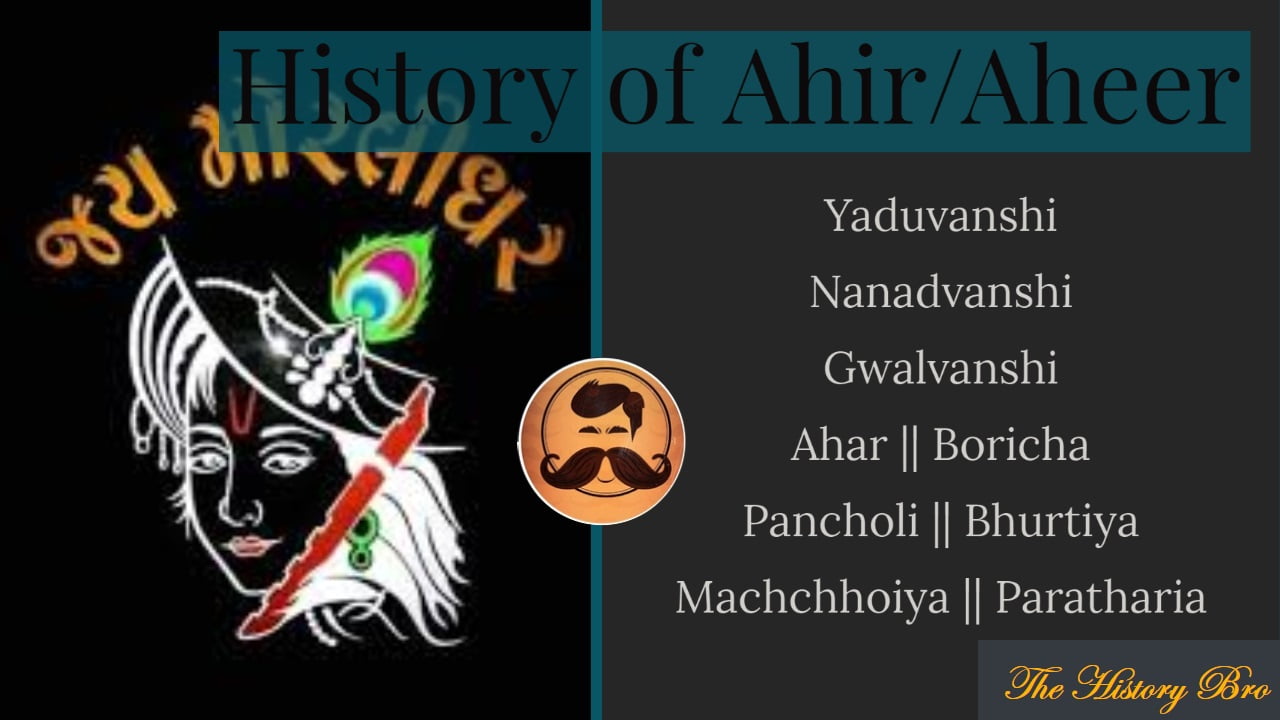 Ahir : Ahir or Aheer is a community in India, most members of which identify as being of the Indian Yadav community because they consider the two terms to be synonymous. The Ahirs are variously described as a caste, a clan, a community, a race and a tribe.

According to the researches (till 1914) made by Shrotriya Pandit Chotelal Sharma of Phulera, Rajasthan – Ahir clan had 1768 or more variants (gotra) & subsets in it.

According to the Markandeya Purana, all the Haiheya aggressors (warrior caste) were killed in a massacre led by Parshuram. In that time, the Ahirs were either a sub-clan of the Hayheya or sided with the Hayheya.

Many historians considers the Ahir to be a tribe descended from the ancient Abhira community. Etymologically, who can cast terror on all sides is called an Abhira. In Sanskrit, A is a prefix to imply opposite of any word and bhīru(भीरु) means afraid.

The sociologist M. S. A. Rao and historians such as P. M. Chandorkar and T. Padmaja say that epigraphical and historical evidence exists for equating the Ahirs with the ancient Yadava tribe

Sunil Kumar Bhattacharya says that the Abhiras are mentioned in the first-century work of classical antiquity, the Periplus of the Erythraean Sea. He considers them to be a race rather than a tribe.

Scholars such as Ramaprasad Chanda (Ramaprasad Chanda was an Indian anthropologist, historian and archaeologist from Bengal.) believe that they were Indo-Aryan peoples but others, such as Romila Thapar(Romila Thapar was born 30 November 1931, is an Indian historian whose principal area of study is ancient India.), believe them to have been indigenous.

According to Jayant Gadkari tribes such as Varsni, Andhaka, Satvatas and Abhiras after a period of long conflicts came to be known as Yadavas.

In the Padma-puranas and certain literary works, the Abhiras are referred to as belonging to the race of Krishna.

There is no certainty regarding the occupational status of the Abhiras, with ancient texts sometimes referring to them as warriors, pastoral and cowherders but at other times as plundering tribes.

In archaeological inscriptions Abhiras are mentioned as belonging to the race of Lord Krishna.  According to K. P. Jayaswal the Abhiras of Gujarat are the same race as Rastrikas of Emperor Asoka and Yadavas of the Mahabharatha.

The Puranic Abhiras occupied the territories of Herat; they are invariably juxtaposed with the Kalatoyakas and Haritas, the peoples of Afghanistan.

From 203 to 270 the Abhiras ruled over the whole of the Deccan Plateau as a paramount power. The Abhiras were the immediate successors of the Satavahanas.

The Yaduvanshi Ahir, (also spelled Jadubansis or Yadavanshi) claim to be descent from the ancient Yadava tribe and lineage of Lord Krishna.

They dominated the plains from Punjab, present-day Haryana to western UP, up to the Yamuna. The Yadavs of the western districts, especially Etawah, Mainpuri, Firozabad, Kannauj etc. are socially more influential traders, business-owners, and later went into government and private service in a big way.

They were the Zamindars & Ruler, ruled in many parts of India.

Rewari (Haryana), Dhaulpur, Alwar (Rajasthan), Bharaul, Kurri kupa (Firozabad U P ), etc were some of the Riyasats of Ahir (Yadavas).

Nandvanshi Ahir is a division of Ahir claim to be descendant of Gokul King Nand (also known as Nandagopa). According to the Harivamsha Purana, Nand was the head of Gopas and cousin brother of Vasudeva.

According to the folklore when Yashoda and Nanda met Lord Krishna for the last time, Krishna gave Nanda 64 of his sons, eldest being Duhra Rao. Krishna told Duhra Rao to write down the lineage of Nandvanshi.

The Gwalvanshi Ahirs are historically associated with cowherding and claim to be descent from the  Holy Gwals, who played with the god Krishna in the woods of Vrindavan and Gokul.

The term Gwal was derived from Gopal which means “protector of cows”.

The Gwalvanshi Ahirs had settled in Azamgarh, Varanasi, Gorakhpur, Mirzapur, besides in Bihar. They were cultivators or farmers in eastern Uttar Pradesh and Bihar. At the turn of the century, they evolved into business and other vocations in a big way.

The Ahar (also known as Ahar Kshatriya) are a Hindu caste in India. The term “Ahar” was historically associated with the Yadav caste, along with the term “Ahir”.

The Boricha’s are a sub-division of the Ahir caste found in the state of Gujarat, India. The word Boricha means those who are of value. They from the Kutch region. Some of them migrated to the districts of Jamnagar, Rajkot & Morbi and Junagdh because of frequent draught. The community was speaking kutchi language but now only some of them know this language. Now they speak regional Kathiyawadi or rough Gujarati and proper Gujarati.

The Pancholi’s are a sub-division of the Ahir caste found in the state of Gujarat, India.

The community is believed to have derived its name from the Panchal region in Saurashtra, their original homeland.

According to their traditions, they migrated from Mathura along with Lord Krishna to the Parathar region of Saurashtra. They are distributed over eighteen villages in the Saurashtra region. The community are found mainly in Junagadh, Amreli and Bhavnagar Districts.

The Machchhoiya are a sub-group of the Ahir caste found in the state of Gujarat in India. The Maschoiya are a community of Ahirs who are said to have settled along the banks of the Machhu-katia river, and the word Maschoiya literally means those from Macchu-katia.

The Bhurtiya are a sub-division of the Ahir community, and like other Ahirs, they claim descent from the god Krishna. They are said to have immigrated to Gujarat, where they were known as Chaurasia. About three centuries ago, these Chaurasia settled in Awadh.

The etymology of the word Bhurtiya is that it is a corruption of the Hindi word phurti (quickness). According to their tribal legends, an ancestor of the community was in such a rush, that she left her jewellery, and was given the nickname phurti, and this name was given to her descendents, and over time corrupted to Bhurtiya.

They are found mainly in the districts of Varanasi, Allahabad, Meerut and Mathura.

The community is believed to have derived its name from the Parathar region, their original homeland. According to their traditions, they migrated from Mathura along with Krishna to the Parathar region of Saurashtra. The Paratharia then migrated to Kutch around 1500–1600 AD.

The Paratharia community consist of a number of clans, Each of the clans are of equal status and intermarry. Like neighbouring Hindu communities, the community practice clan exogamy.