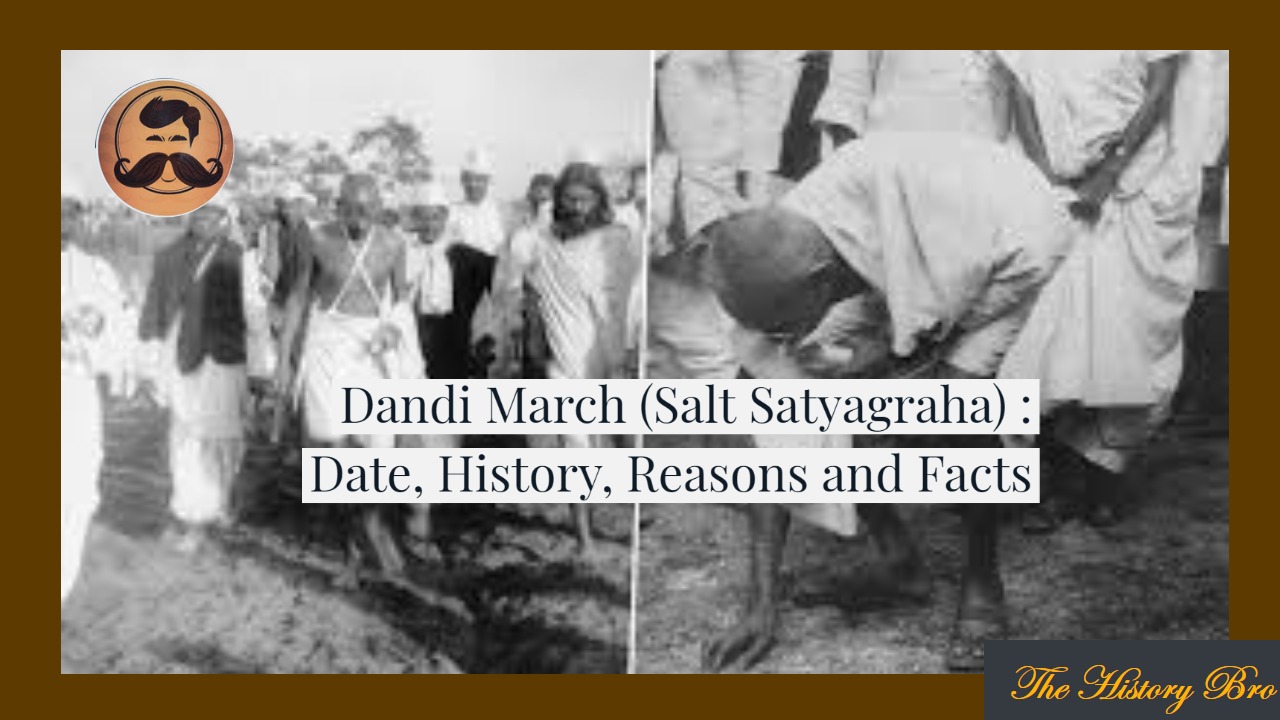 The Dandi March, also known as the Salt Satyagraha, Salt March and the Dandi Satyagraha, was an act of non-violent civil disobedience in British Raj initiated by Mahatma Gandhi against the high tax on salt that was imposed by the British Government in India.

Why does Dandi March or Salt Satyagraha begin?

At midnight on 31 December 1929, Congress Party  raised the Tricolour flag of India on the banks of the Ravi river at Lahore and in the session of Lahore, Congress Party passed the resolution of Purna Swaraj. It was proclaimed on 26 January, 1930 and decided that civil disobedience was the only way to achieve it. Mahatma Gandhi and his follower chooses the path of non-violence to break the high tax put on salt against the British government. The then, Viceroy Lord Irwin could not prevent the salt march from taking place.

Salt was a common commodity used by the every people of all community and the poor people were affected more by the high taxes on salt. Until the passing of the 1882 Salt Act, Indians were making salt from seawater free of cost. But the Salt Act gave British monopoly over the production of salt and authority to impose high tax on salt. Violation of the Salt Act was a criminal offence in British Raj. With the Salt Satyagraha, Mahatma Gandhi tried to unite Hindu and Muslims against Britishers because the cause was common. Let us tell you that 8.2% of the salt tax accounted for the British Raj revenue from the tax.

Due to the Salt Act, the large population of India was not able to sell salt independently and instead, Indians were required to buy expensive, heavily taxed salt that often was imported. A great majority of Indian people were affected and poor were even not able to afford to buy it.

From where Salt March or Dandi March begins?

On 2 March, 1930, Mahatma Gandhi informed about the plan of Salt Satyagraha to Lord Irwin. He told that on 12 March, 1930, he would begin the Salt Satyagraha with few dozen people from his Sabarmati Ashram near Ahmedabad to break the Salt Law imposed by Britishers. During the march, he and his followers will pass through several villages of Gujarat. The distance of the Salt March was 385 Km (240 miles) starting from Sabarmati Ashram to the coastal town Dandi on the Arabian Sea. On the way, thousands of people joined Gandhi ji.

Sarojini Naidu also joined the movement. Every day more and more people joined him and finally, on 5th April, 1930, they reached Dandi. On 6 April, 1930, Mahatma Gandhi with his followers broke the salt law by making salt from seawater. It is said that this time there were around 50,000 people who had participated in the Dandi march.

You May Also Like To Read : History of Kashmir through Veda and Puranas

19 Interesting Facts Of Sushant Singh Rajput That You Must Know