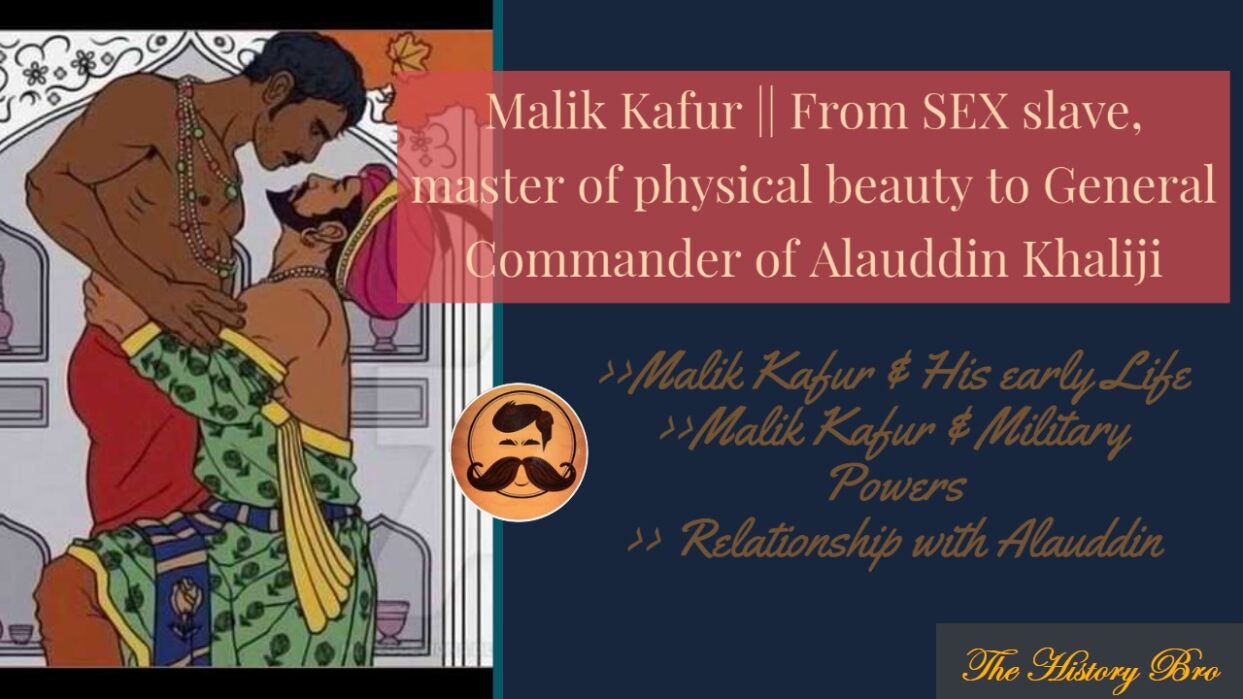 Who was Malik Kafur?

Born as a slave , Kafur in his youth served a wealthy Khwaja of Khambhat (as slave).

It is considered that seeing the beauty of Malik Kafur, his original master purchased him in 1000 dinars and this gave him epithet hazar-dinari. History always reminds him as “Thousand Dinar Kafur” or “Hazar –Dinari”.

Kafur was captured from the port city of Khambhat by Sultan’s general Nusrat Khan, during the 1299 invasion of Gujarat, and converted to Islam.He was presented by Nusrat Khan to Sultan in Delhi and since then he served Sultan Alauddin.

Malik Kafur began his growth as a military commander. In 1306 Alauddin sent him to Punjab to repulse a Mongol invasion from the Chagatai Khanate, and he successfully accomplished it. By this time, he was referred to as Na’ib-i Barbak (“assistant master of ceremonies”).

Happy with his this accomplishment, Sultan sent him to Deccan Plateau where he served as a commander of a series of great military raids and became the reason of increase of Muslim power in the region.

Later on, Kafur invaded the Yadava kingdom of Devagiri ,the king (at that time) Ramachandra lost the battle and was taken to Delhi as a present to Sultan.

In 1309, Alauddin sent him on an expedition to the Kakatiya kingdom, which was also successfully accomplished by Kafur who returned to Delhi in June 1310 with a huge amount of wealth. It is said that the Koh-i-Noor diamond was also among the loots, and being impressed by that, Alauddin rewarded him generously.

In 1311, Kafur subjugated Dwarasamudra, the Hoysala, and the Pandya kingdom and obtained a large number of treasures, horses, and elephants and reached Delhi in triumph on 18 October 1311.

Alauddin took measures to raise Kafur above all other officers. The royal canopy and the royal pavilion were sent with Kafur, and the officers were directed to pay their respects to Kafur daily and to take their orders from him.

Kafur ultimately rose to the position of Na’ib (viceroy), although the date of his appointment to this position is not known.In 1315, when Alauddin felt seriously ill, Kafur was recalled from Devagiri to Delhi.

During Alaudidn’s last days, Kafur held the executive power.During this period, Alauddin became very distrustful of his other officers, and started concentrating power in the hands of his family and his slaves. He removed several experienced administrators, abolished the office of wazir (prime minister), and even executed the minister Sharaf Qa’ini. It appears that Kafur, who considered these officers his rivals and a threat, convinced Alauddin to carry out this purge. Alauddin had greater trust in Kafur than other officers because, unlike the other officers, Kafur had no family or followers. According to Isami, during the final days of Alauddin’s reign, Kafur allowed no one to see the sultan, and became de facto ruler of the Sultanate.

During his reign (even before his illness), Alauddin was infatuated with Kafur, distinguishing him above all his other friends and helpers, and Kafur held the highest place in his esteem.

Based on Barani’s description, scholars Ruth Vanita and Saleem Kidwai believe that Alauddin and Kafur were in a homosexual relationship. Other historians and scholarsalso believe Alauddin and Kafur were lovers in a sexually intimate relationship. Historian Banarsi Prasad Saksena states that Alauddin was infatuated with Kafur during the last years of his reign, but believes that the closeness between the two was not sexual.

Alauddin’s former bodyguards (paiks) disapproved of Kafur’s actions against the family of their deceased master. Led by Mubashshir, Bashir, Saleh, and Munir, these bodyguards decided to kill Kafur. When Kafur became suspicious of a conspiracy against him, he summoned Mubashshir to his room. Mubashshir, who had been permitted to carry arms in the royal quarters since Alauddin’s day, wounded Kafur with his sword. His associates then entered the room and beheaded Kafur, also killing two or three gatekeepers who had attempted to protect him. This event took place sometime in February 1316.

These Temple in India are reflection of how India was extremely liberal and open about the concept of Love with pictorial representation of Kamasutra even before the 13th century.

The Magh Mela: A Spiritual Journey on the Banks of the Ganges